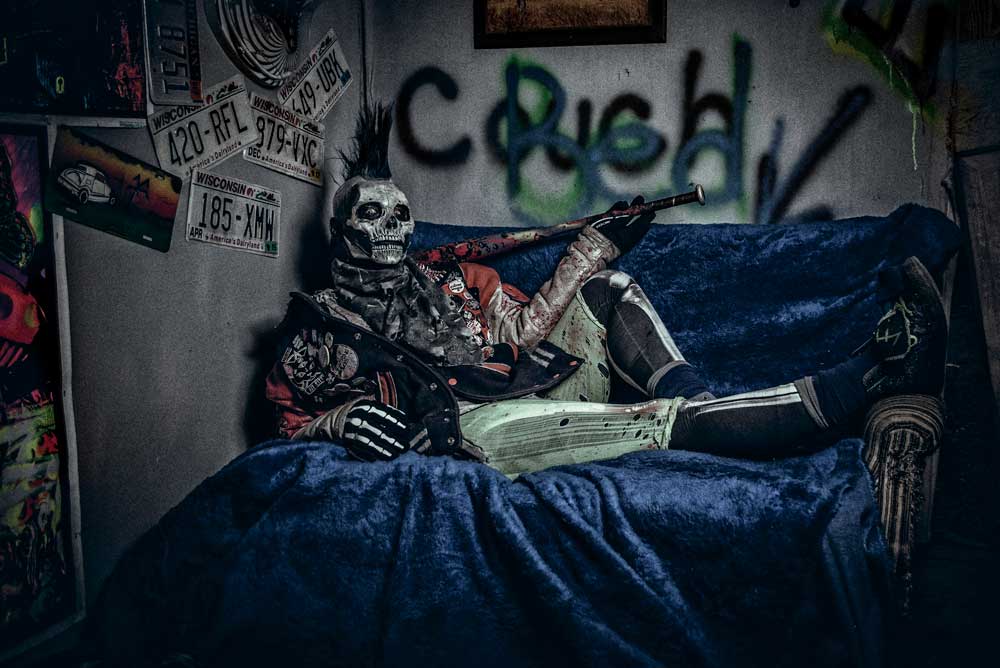 “Burn it all down” Born of Chaos and Murder, Moira watches with glee as the world rips itself apart in self-righteous indignation.  Humanity is a joke!  The punchline?  Mayhem!  Turmoil!  Pandemonium! DEATH! HAHAHAHAH.  “How do you like THOSE apples?”

A dark and stormy November night in a small town in Minnesota…A little girl’s despised stepmother did something unforgiveable.  She threw out Mr. Nightmare, the girl’s beloved kitty.   Hate slowly grew for this woman who called her Father husband.  But this was the strike that lit the fire.   The girl ran away, and became Kitty.  She followed the voices in her head, but most particularly the one that sounded most familiar…her beloved Mr. Nightmare.  He led her to a place all cats eventually find-Green Bay Fear. 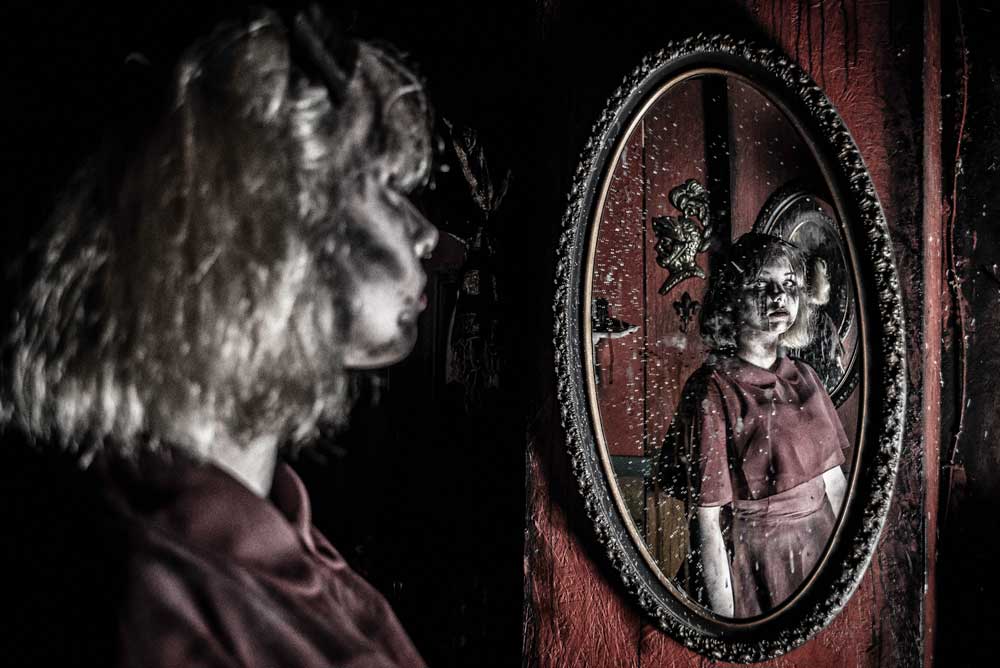 Born to a rich family, Ashes lived a life of luxury until it left her snobby and pretentious, much to the dismay of her parents.  Hoping to teach her a lesson, they locked her away her room.  One day, she found a pack of matches hidden away.  She was so bored and angry, she lit her room ablaze.  She escaped and ran off, pausing to look back at the flaming mansion behind her.  Knowing she could never turn back she wandered in the woods until she discovered Charles and her family of misfits at Shawano Manor.  Finally, she found a place where she was accepted and could call her home.

Skittles sadness for his lost brother grew and he needed someone to latch on to.  Skitz saw how lost he was and gave him something to hold on to.  Together they developed an obsession of bananas.  For Skittles, this fascination also made him hold Skitz on a pedestal, even painting his face like Skitz and changing his name to Skit-tles. 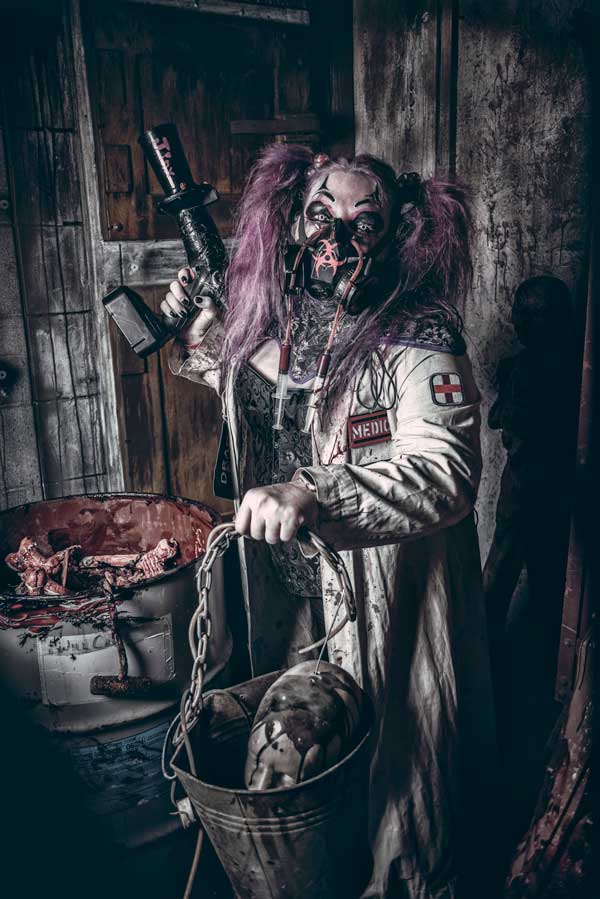 Jinx was a hospital lab assistant but the other staff was afraid of her because of the sinister experiments she would perform.  One night, a particular experiment went wrong and Jinx was banished from the hospital.   With nowhere to go, she searched until she found a place where the weird and macabre are accepted.   Surrounded by the Fearstein Family, she continues her evil and mad experiments with delightfully terrifying results.

Involved in a motorcycle accident on Hwy 30 on his way home from Rock Springs, Wyoming, Rydir’s unconscious and disfigured body was picked up by EMTs and he was thought to be dead.  In shock, he awoke in a panic and wreaked havoc, beating to death the EMTs and escaping the ambulance.  In search of his motorcycle, he backtracked on the highway for days.  Falling asleep in a fit of exhaustion, he awoke to find himself in the Howling Hollow of Green Bay Fear, greeted by creatures and monsters who welcomed him with open arms, though still in search of his motorcycle. 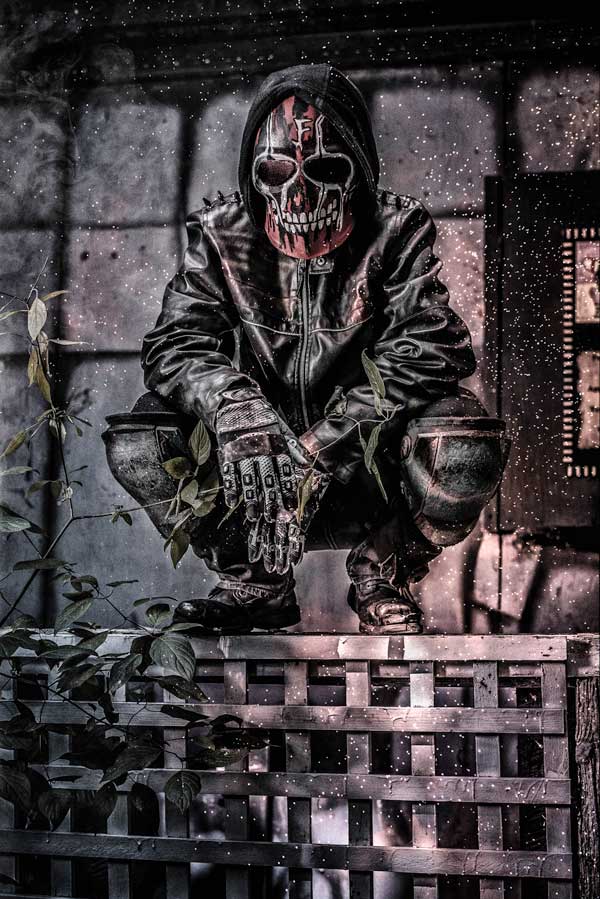 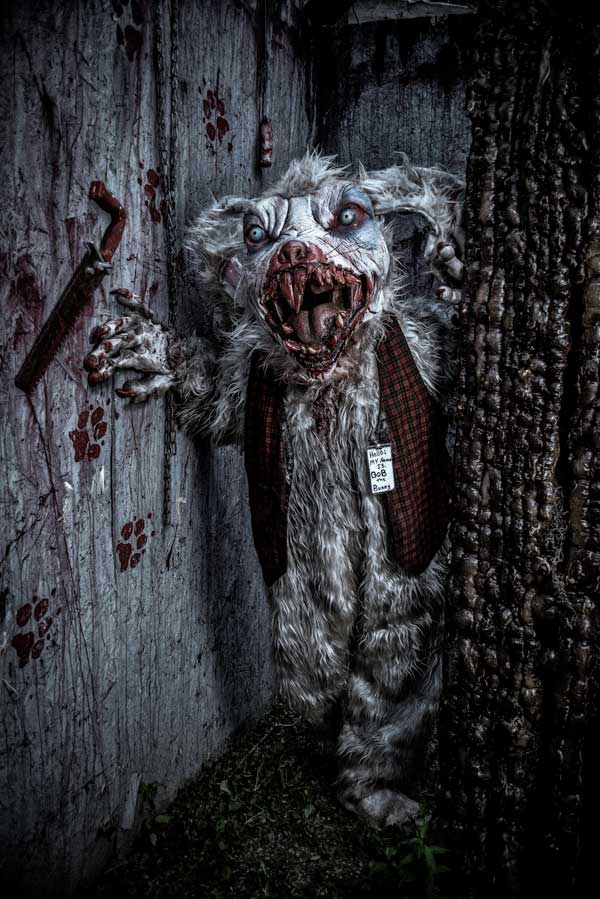 A creature from Eden you don’t want to meet, For if you get to close, he will want your feet.   Don’t get caught!  He’ll try to keep you here,   inside his playground called Green Bay Fear!

After a 1920 influenza outbreak the dead was accumulating faster than the bodies could be cared for.  A woman who held the key to the temporary Morgue stayed close guarding the dead.   Outcast by society for her love of the dead, she was labeled the Morgue Witch.  Enter our halls and you may leave in pieces, as she uses her dark magic to collect new victims for her beloved dead. 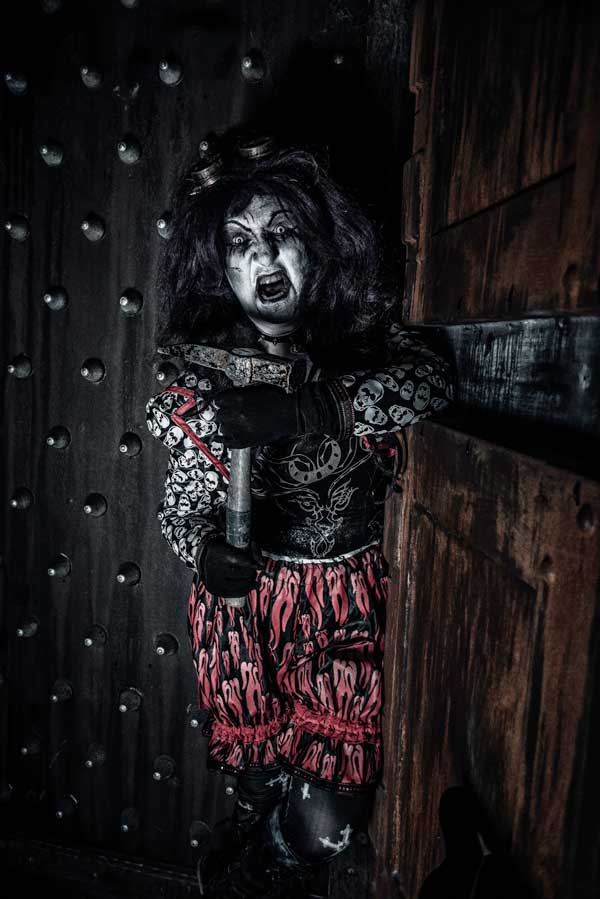 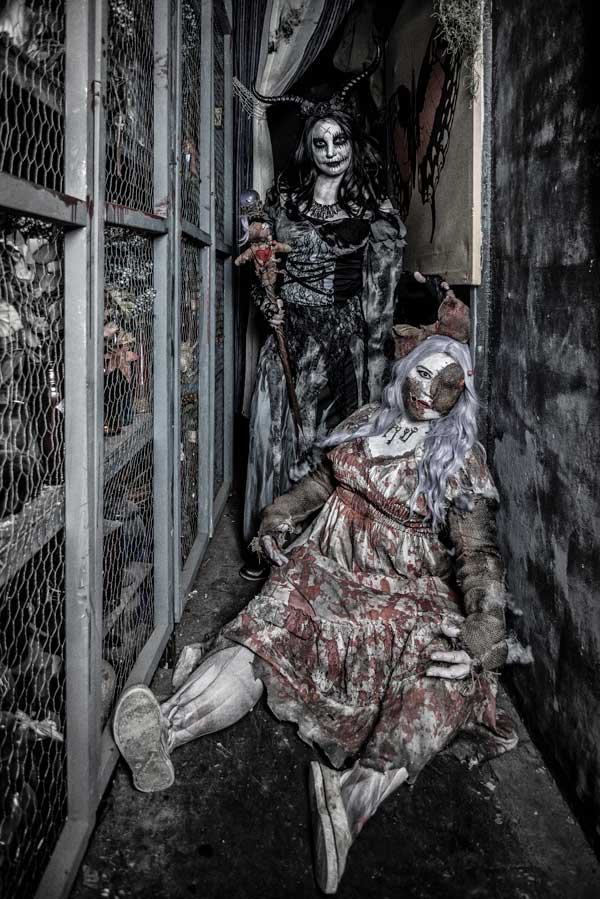 Cursed at birth, Draven was disowned by her family when she began to grow horns. Teased and tormented by other children, Draven sought refuge in an abandoned cottage in the woods.   The only company she had was her doll, which she kept close since she was an infant.

One day a little girl named Kora ventured out to the cottage amidst rumors that a girl with horns was banished there.   Kora was not afraid of Draven’s horns and they became fast friends.   As the years went by Draven became scared that she would once again be alone.  So she used her supernatural powers to turn Kora into a dolly that would be with her forever.   Together they play, always vigilant for new children to lure to the cottage and become their evil little dolls.

You cry, you shake, but try not to scream.  The clown…he just might hear you.  And when you think you just might escape…Look out!   It’s Mr. Jingles! 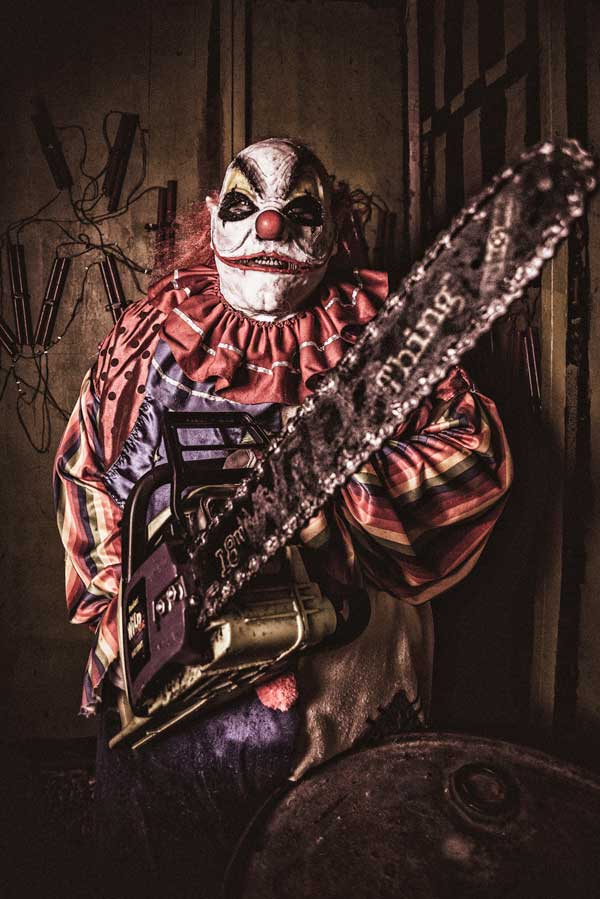 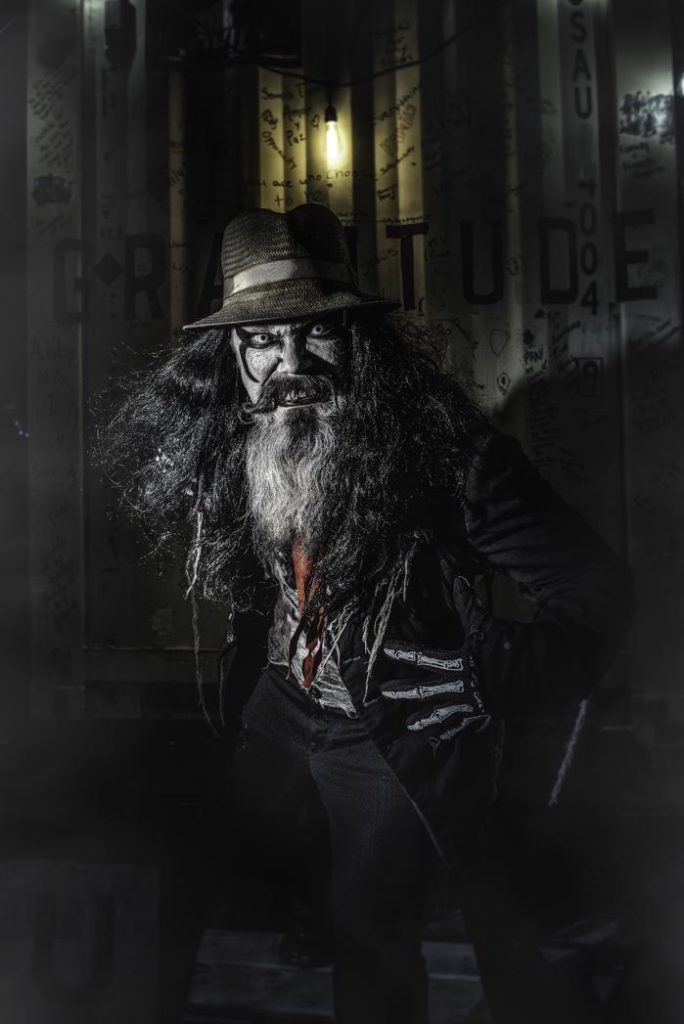 Eenie, meenie,miney, moes…I’m going to chew on all your toes!

Skitz has seen all there is to see when it comes to munity but, nothing prepared him for the horror of the world today.  Influenced by the savior of the family, he has found himself preaching the new found glory of the ‘freaks’ on the grounds.  Will you join the family? 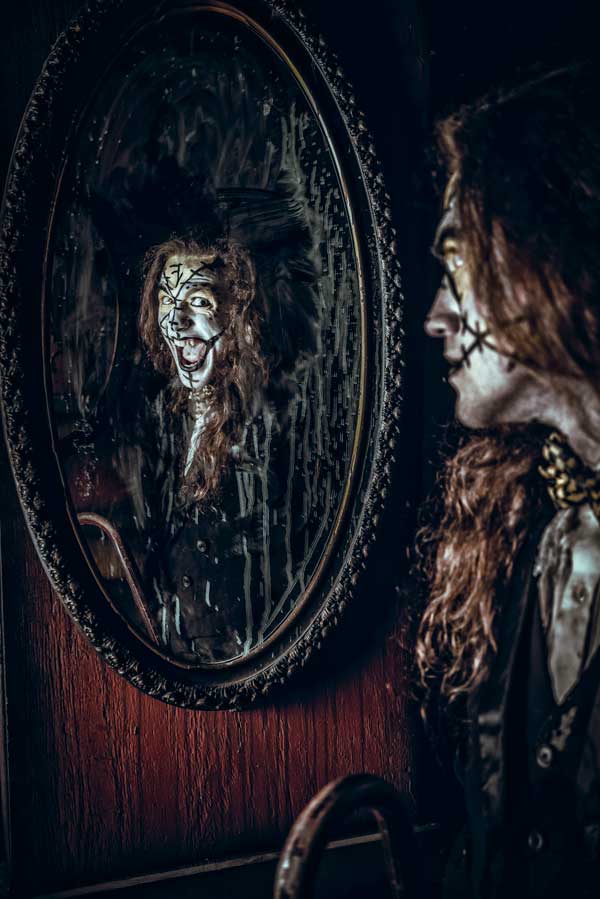